WEEE! Nina is literally one of the most talented authors I’ve ever read and I’m so damned pleased that she graced my blog with her awesomeness. She’s giving us a peek into her process for worldbuilding, and if you’ve read her book Bell Eleven, you know this is an area where she’s on top.

When it comes to fiction, the universe is undeniably one of the key features of a story – and perhaps even more so in regards to fantasy (although this one’s up for debate). Get it right and you might have your own theme park one day; get it wrong and it doesn’t matter how good your plot is – it simply won’t work.

So where does one start digging?

First you might decide what kind of place it’s going to be.

These are the basic questions you’ll do well to map out first, sort of like the skeleton of the universe. Once you’ve got these aspects down you’ll have some idea of the possibilities and limitations of your world and you can start fleshing it out more in detail.

When I started building the world for The Landskapë Saga I knew I wanted it to have its roots in our reality. However, I’ve also got an unhealthy interest in what lies beyond those borders (an obsession I blame JK Rowling for – I mean, hands up if you also spent your childhood touching discarded junk trying to find a portkey). I wanted to find the cracks in our image of the world and peek through them to see what could be found in there.

My world therefore has several separate realms, each with their own unique qualities, rules and preconditions (because why do one difficult thing when you can treble the effort?).

But where do you get your protein?

Mapping aside, there are so many things that are necessary to consider when building a fictional world, things and infrastructure that “just work” in reality. Food, housing, electricity, water, transportation –things we take for granted as basic human needs.

And they’re equally important in a fictional world.

Again, the rules of the world will affect the plot. Say the characters want to save the world and it’s late. Unfortunately no trains run at that time in their world so they must hitch a lift. This decision forced by the setting will decide their new direction and can take them a step forward in the mission or lead to another exciting obstacle which they must overcome. You see, the twelfth character doesn’t always have to play nice.

For The Landskapë Saga I had to sort these questions out for a kind of people who don’t eat, don’t sleep and are strangers to human technology but need to move around a lot. Now, there’s a challenge!

Weaving meaning into your world

Having three worlds to play with might have caused a headache or two, but it also allowed me to include other aspects in my universe. Like Norse mythology and philosophy, which I really wanted to play a big part in the story.

In Bell Eleven you may recognise symbols like the Yggdrasil from the Poetic Edda, represented by the Willow tree, and there’s also a sort of conceptualised symbol of Jeremy Bentham’s panopticon in the TV tower of Amérle. These symbols are certainly part of the world building and add another layer of interpretation between the lines, like secret messages to the observant reader.

World building is an entertaining business and there’s plenty more to say about it, but we’ll have to save that topic for another time. Thank you to the magnificent S Usher Evans (whose worlds are brilliantly constructed, might I add) for letting me give this brief intro on building a fictional world from scratch.

Finally, let’s not forget about that grand feeling of invincibility once you’ve finished building your world and you just lean back and watch your doll’s house breathe and move on its own.

Nina J Lux is the author of urban fantasy novel Bell Eleven and the sequel Eight Bridges, which LAUNCHES TOMORROW!


The Landskapë Saga is a YA urban fantasy series (with just a hint of dystopia) in four parts about tolerance, sustainability and the difficult choices we must make in the face of something much larger than ourselves. 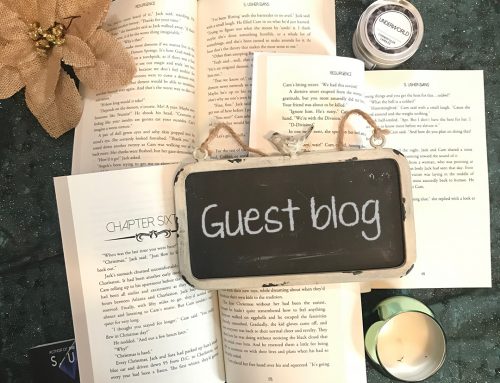 The Magic of Retellings: Guest Post with C.L. McCollum Gallery